Today is the Day of the Programmer! It is a special day to honor computer programmers. 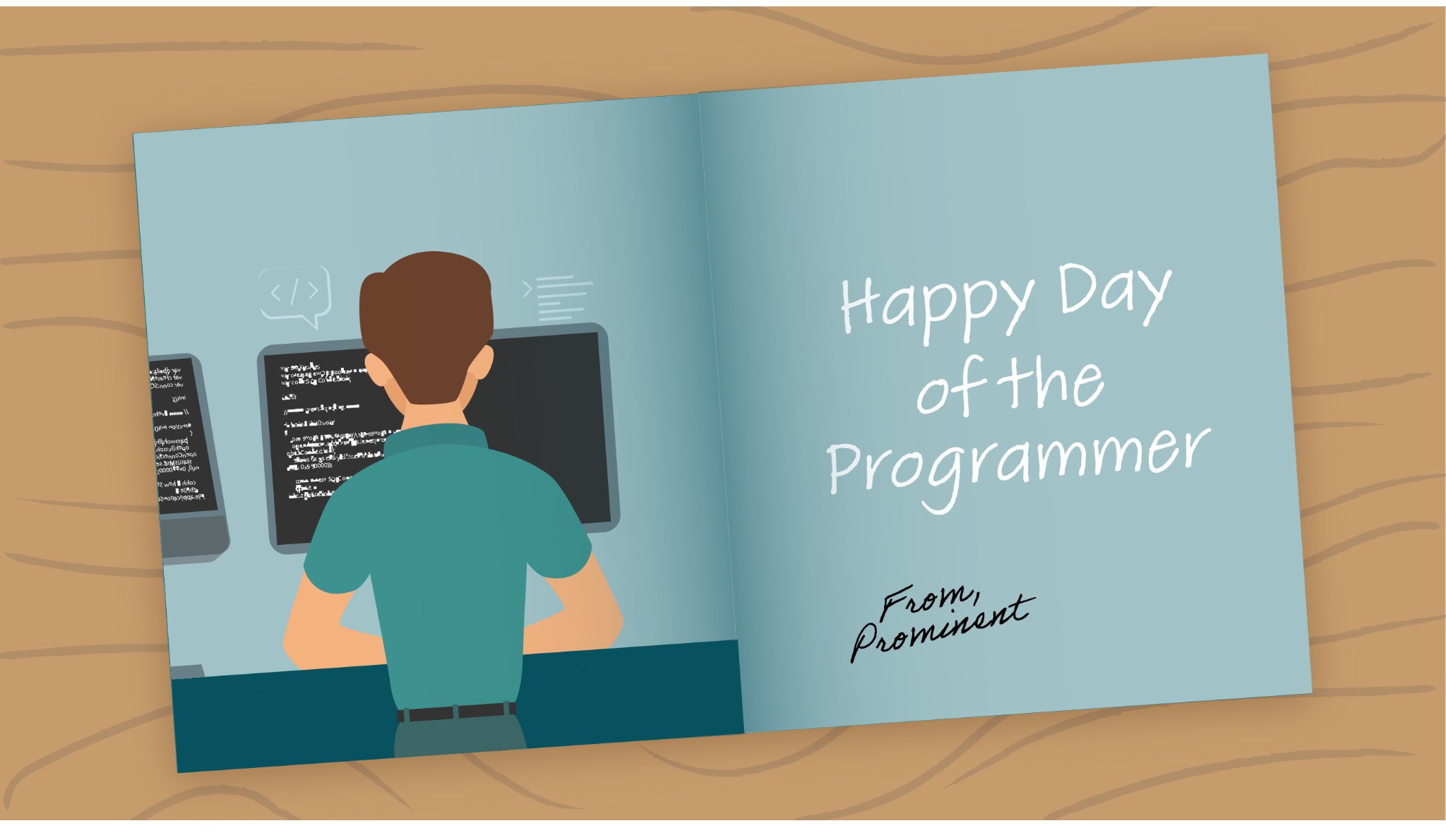 What? Programmers have a special day? What is a programmer? Do we really know what they do?

So, yeah, it is 2021 and everyone has a special day. But, the truth is that programmers deserve some honor. I will tell you a few reasons why in this article, but first let’s get a little terminology cleared up. At Prominent we hire a type of programmer, called developers. While programmers simply write code, developers create software to solve problems, requiring more creativity.

If you are new to the programmer/developer lingo then I’m with you. If you would have asked me what a software developer does when I was working in the “blue-collar” industry, my answer would have been, “Umm, they write code, hack into mainframes, can bypass every password on any system, and play Dungeons and Dragons.” Now, after working with developers at Prominent, I have learned not only what developers actually do, but how and why they do it.

Here are some of the things I’ve learned about Prominent’s developers.

Even though only a few developers on our team actually play real instruments, the title “Rock Star” has been earned.

In my position as Business Development Manager, I am the (self-proclaimed) face of the company, and with that, I am used to a level of adoration from customers. But often, I find that our developers have stolen my spotlight. Our customers fall in love with them. I get it, our developers do solve their problems. Not only do they solve their problems, but they open up our customer’s eyes to a better way of doing things that will improve their processes.

When asked what is most admirable about our developers, one of our Project Managers stated, “Their ability to problem-solve, not only software problems but scenarios outside of the code that improve the world around them.”

Our developers are in constant communication with our customers and at the end of the day, they are the ones putting smiles on faces. I can’t compete with that.

So I made that word up, but it really does fit.

They are engineers in every facet of the word. The smallest details matter to them. They listen to understand what the customer is needing and then help create a solution that delivers exactly what is needed in the most efficient way. Engineers can tell you the purpose of every component in a bridge and how it impacts the final product, just like our developers can tell you how each component of custom software impacts how you use it.

Details are key, but our team of developers can also dial it back and speak to the people that are less technical (like me) on their approach and their reasoning. This is what makes them so versatile. They serve as custom software’s jack of all trades.

Technology and problem-solving excite them.

Things that require a high level of thought and strategy are what capture their attention. The more complex the problem, the more excited they seem to get. They are also predictably nerdy. In fact, if they were writing this I’m sure there would be multiple Lord of the Rings references already.

On my very first Friday in the office, a group of developers let me know that they got together over lunch every Friday and played a board game. That board game? You guessed it. Dungeons and Dragons. What I admire about their nerdy-ness, is that they are united in their passions. One developer says, “We are a close-knit team. They are my nerd-kin. As the Fellowship is to Gandalf, so are Prominent’s developers to me!”(see there’s that LOTR reference.)

They’re the backbone of what we do.

At Prominent, we are a developer-centric company.

As a true custom software development firm, we depend on the skill and ability of our developers. To quote a developer, “Our contributions directly affect the success of the project and we get to see our work truly helping our customers and their businesses succeed.” It’s true. Prominent builds exceptional and predictable software, and our developers bring both of those qualities to the equation. When I talk to prospective customers about working with Prominent, I highlight our developers because I count on them. And they always deliver.

After my personal experiences and feedback from peers, I have a much better answer to the question, “what does a developer do?” You have read my long answer but my short answer is this, developers are communicators who improve processes down to the smallest detail, belonging to a kinship that is the backbone of this company.

I am not the only one who has great things to say about them, we asked the rest of the Prominent team to chime in too.

What our team has to say about software developers

We wanted this blog to honor developers so we asked our Prominent team for their input. Here are some fun quotes from the team about our developers.

What is the best part about being a developer?

“Being a developer gives both sides of my brain the workout it needs every day.”

“The best part of being a developer is the continuous learning. There are always new technologies to acquire and better ways of developing software.”

In what way do you think the developer is most misunderstood?

“We're not code monkeys. We apply critical thinking and craftsmanship to build solutions.”

What do you like most about developers in general?

“They are generally curious by nature and they don't like a lot of meetings.”

“Developers are among the few who catch all my corny sci-fi and fantasy references.”

“The way their brains work. They're so logical. It's so fun to be in a meeting with them as they walk through picking apart a problem verbally.”

“They are world-class technical talent, but are also super fun and loveable.”

“Our developers are great problem solvers. They never say no... they really think about "how" it could work. They don't take themselves too seriously; they know they are nerds.”

If you could force all our developers to say something to themselves in the mirror every morning, what would it be?

“You are a magical being!!”

Each and every one of you are all rock stars and you problem-solve to make the world a better place every day.”


We couldn’t agree more with all of the comments above. Prominent developers and beyond, we appreciate all that you do. Whether you refer to them as a programmer or a developer, we are thrilled to honor them on this day, The Day of the Programmer.

ABOUT THE AUTHOR
Sannon Norick
I’m probably the only Sannon you will ever know, so hello! I have over eight years of experience working in sales and account management and enjoy finding solutions to problems. I joined Prominent in January of 2020, where I work to find custom enterprise-level software solutions for businesses. By listening, I work to identify your needs and values to turn incredibly complex web applications into high performing, clean and user-efficient programs.